Date:
June 5, 2014
Source:
University of Southern California
Summary:
In the first evidence of a natural intervention triggering stem cell-based regeneration of an organ or system, a study shows that cycles of prolonged fasting not only protect against immune system damage — a major side effect of chemotherapy — but also induce immune system regeneration, shifting stem cells from a dormant state to a state of self-renewal.

Here’s an interesting and enjoyable version of a Keto Diet, which features, basically, regular or occasional drinking while being in ketosis. Lose weight and feel, um, tipsy.

But how can drink and stay in ketosis? By drinking only clear hard alcohol like vodka or tequila. I speak for dark liquors personally, I’ve only tried this with vodka. When you drink beer, wine, or a sweetened mixed drink, the carb calories are probably enough to throw you right out of ketosis, so if you want to be in ketosis you can’t drink beer. But you probably guessed that.

But the vodka only “pauses” your ketosis. The methanol in the vodka is converted to usable energy in your liver immediately,  and when it’s used up, the liver goes right back to making ketones out of body fat reserves.

It was kind of amazing the first few times I  tried it, but here’s how it goes: Last night, tested myself after work in heavy ketosis with my ketostix, then had a couple vodka and diet sodas over the evening. Tested myself before bed – out of ketosis. But this morning, I woke up and tested, and I was back in the dark purple heavy ketosis ketostix reading. Pretty cool.

Now there’s NO reason not to go into ketosis regularly.

Can I drink diet soft drinks while I’m doing a low-carb or keto diet? It’s a big question.

In general, I say, Yes, absolutely! There are, of course, some early studies which describe an effect on the microbes in your digestive system whendrinking artificially sweetened soda. And those studies may prove important; we are just beginning to understand how bacteria in our gut affects our diet.

But, that said, don’t worry about those studies. No researcher denies that sugared soda raises your blood sugar and insulin levels in a crazy way that diet sodas do not. At all. Forget it.

For people who are switching from sugared sodas, or people, like me, who get tired of water all day, diet soft drinks are a nice treat, with few drawbacks.

If you want to stay as natural as you can with sweeteners, you can try a Stevia-sweetened drinks, like the soda in this picture: Zevia.

Stevia is a “natural” sweetener which doesn’t raise your insulin levels or cause a glucose response, and Zevia has a whole rainbow of flavors.

I just drank a case of these, which – full disclosure – Zevia sent me because I’m obviously a soda expert, but I really liked a few of the flavors. I saw them for sale at my local Sprouts supermarket, and I plan to mix them in with my coffee and water at the office. 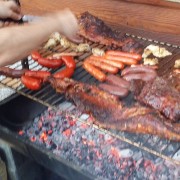 So, here’s an example of how to do a low-carb lunch, eating out. In this case, this afternoon, the restaurant was a food truck.

Order a foot-long Polish sausage, apply a bit of mayonnaise and a slice or three of jalapeno, and then don’t eat the bun.

It tasted real good. I was full and satisfied. Homemade mayonnaise usually doesn’t have sugar in it, but store-bought has some. Still, as condiments go, it’s mainly fat and protein.

Mustard works, too. Keep it enjoyable and you’ll keep it going.

I think the food truck guy saw it as a waste of a perfectly-toasted bun. 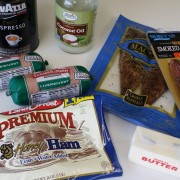 Started another keto tune-up today: Had buttered coffee for breakfast, ham and liver pate for lunch, and am planning on just having a burger for dinner. Also made sure to eat plenty of butter and coconut oil in my coffee all day, to get my body as quickly into ketosis as possible. I’ll measure my ketosis level with my ketostix tonight and in the morning and see how long it takes for ketosis to start after eliminating carbs.
It is possible to maintain ketosis while eating carbs, especially the green leafy variety, but it’s easier for me to start ketosis by going zero carb for about two days.
Why am I doing it? A health tune-up, that’s all. The human body is meant to work in ketosis part of the time, and that’s what I do. Keeps insulin resistance down, weight under control, blood pressure low, and fights disease. 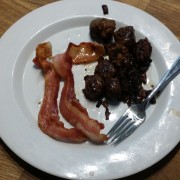 Check out this article in the New York Times, upending one of the biggest dietary ideas of our time: that you need to limit salt to treat your high blood pressure. Turns out, not so much.

A new study suggests that dietary salt may have little or no effect on the risk for heart disease in older adults.

The study, in JAMA Internal Medicine, included 2,642 people, average age 74. Half the participants were women, 62 percent were white and 38 percent were African-American. All were free of heart disease at the start of the study, and researchers followed them for 10 years. They used dietary questionnaires to estimate sodium intake.

The researchers adjusted for sex, race, body mass index and more than two dozen other health and behavioral characteristics. Over a range of sodium intake from less than 1,500 milligrams a day to more than 2,300 (about a teaspoon), there was no significant difference in risk for cardiovascular disease, heart failure or death.

The lead author, Dr. Andreas P. Kalogeropoulos, an assistant professor of medicine at Emory University, acknowledged that estimates of salt intake were based on self-reports, which are not always reliable.

Current guidelines call for sodium intake of less than 1,500 milligrams a day for people older than 51. Dr. Kalogeropoulos said he saw no reason to raise the number.

“We need more prospective evidence in a clinical trial before moving in that direction for older adults,” he said. “By no means are our findings a license to consume more salt.”